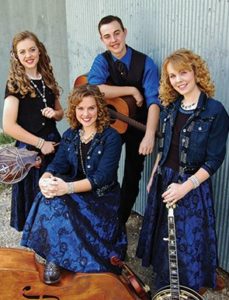 Southern Raised is a group of award winning kinfolk, trained in classical music but raised in the bluegrass soaked Ozark Mountains. They have created a trademark sound where classical meets bluegrass and city streets meet country roads. Their sound spans Christian Country, Bluegrass, Celtic, and Classical. They’re talented, energetic, and when these siblings croon a ballad it’s nothing short of breathtaking. Be prepared to expect the unexpected as new life is breathed into the music and your soul. Collectively they have received nominations from Singing News Fan Awards, Diamond Awards, Front Porch Fellowship, and 32 alone from the Society for the Preservation of Bluegrass Music of America. These four string-wielding siblings, Lindsay, Sarah, Emily, and Matthew have a strong passion for music that has taken them to the cutting edge of creativity. They are sweeping the country with a sound that has been described as “the other side of amazing.” 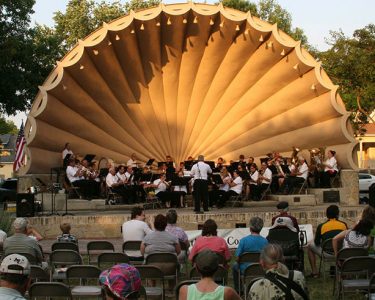 Bring your lawn chair, pack a picnic basket, and enjoy an evening with friends for concerts in the park featuring Altar Boy Picnic – and then followed by the incredibly talented Katie Scullin.

Held Wednesday evenings during the summer at Barrie Park Band Shell, an outdoor music venue for the community, for a total of six concerts – all for a charitable cause. Funds raised are donated to the Boys & Girls Club of Fort Atkinson, and applied to the Fort Atkinson Charity Concert Scholarship, which supports students who have shown a commitment to the community.

Enjoy a summer evening in Commons Park. Come early and enjoy the Lake Mills Artisan/Farmers’ Market before the band begins at 7pm.

Enjoy The Driftless – an Americana band – for our final outdoor concert of this series.

Sit back and enjoy music by the Fort Atkinson community band in the Barrie Park bandshell.

Join us for the 14th season of Fort Atkinson Cruise Nights for music, food, old cars, and more! Featuring over 400 vehicles including restored vintage trucks, tractors, and classic automobiles. The Fort Atkinson Generals will provide the food stand and Kent’s Ice Cream will have their famous Big Bar available for purchase.