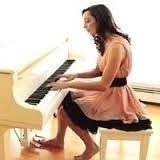 Jenn Bostic is a Minnesota native currently residing in Nashville, TN. She has performed across the United States, as well as the United Kingdom, including venues such as the Grand Ole Opry, the Ryman Auditorium, the Bluebird Cafe, and Jazz at Lincoln Center. She has also performed for artists such as The Band Perry, Randy Travis, and Christian Kane. Jenn’s emotive songwriting and powerful vocals have been touching hearts around the world.